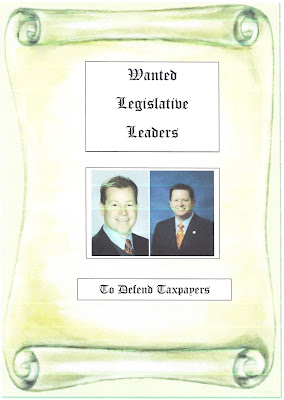 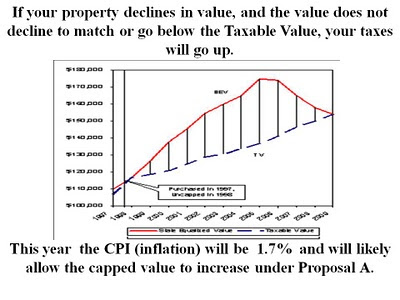 The red line in the graph is the State Equalized Value (SEV) and the Blue is the Taxable Value.  For years, they have been talking about tweaking Proposal A.  The problem is that suggestions were not always in the interest of the taxpayer. The suggestion that I have found to have the most value is the elimination of the "pop up". Under Proposal A, whenever property changes hands the new owner's taxes "pop up" because he now must pay on the SEV.  If you notice in the graph there was quite a difference between the SEV and Taxable Value when property was increasing in value.  As a result, two identical houses in the same subdivision could be paying dramatically different taxes because one person had been living in the house since 1994 when Proposal A Passed and another bought a house at the height of housing values. What that means is that there could have been almost a 50% difference in the amount of taxes paid for the same services.
The legislature should act now to eliminate the "pop up". and bring everyone down to 50% of their true cash value which is what the SEV should be and which is also in most cases the present Taxable Value. We need to bring some sanity back to the system.  The Constitutional limitation that prohibits increases in taxable value to inflation or 5% which ever is less would remain in effect.  Revenue for government units woulds be regulated by the Constitution (Headlee Amendment) and voted millages by the people.
Posted by WCTaxpayers at 9:40 PM