When in Doubt Check History

What is happening in this country? Has everyone gone crazy? They say education is important and it is. What they need to be teaching is more history, American and European. There is a lot of talk about nationalizing things. Lets take the two most talked about areas one at a time.

First lets talk about medicine. I can not believe that they are still pushing this. The influx of people into this country to access medical care is impressive. While everyone may eventually get a chance to receive medical care with socialized medicine, you still have to be alive to receive it. Lines are long and care is sometimes restricted by the patient's age. The older I get the less enthusiastic I become about that prospect. I thought perhaps you might like to see this video.

As you can see, it's not all it's cut out to be. There are a bunch of other testimonials which say the same thing. Americans are not used to waiting for a hamburger let alone for care of a life threatening disease. There is care for the uninsured, if they need it or ask for it.

The next topic is the nationalization of the oil companies. I know these people are out of their minds. Name me one thing that the government has done well. There are some things that are better just because of the magnitude of the job, but that doesn't mean they do it well. If you are old enough to remember back to the 1970's, you will remember the so called "Oil shortage". Eventually, Jimmy Carter and congress slapped a "windfall profits tax" on the oil companies. That only served to drive the oil prices higher. What drove the prices down? We did. We found ways to conserve energy. We used less. Those who could afford it insulated their homes and put in thermal windows. We walked when we didn't need to ride. We bought energy efficient appliances and electronic thermostats. We lowered the heat and put on more clothes. The changes will come only if we demand them. This video shows what happens when the government takes over.

People tend to associate Fascism with people on the right. In reality it comes from the left. We can not let our country go the way of other failed governments. We have to many lives invested to allow the United States to slip into socialism. People come here for opportunity. We should facilitate that not with a "hand out" but with a "hand up". Socialism does not work.

The next five videos are here because I am reading a very interesting book by the speaker on liberal fascism. I think you might be interested in what he has to say. It will give you some insight and provide you with something to do.

Posted by WCTaxpayers at 3:02 PM 1 comments

Two Things Everyone Should Do or Not 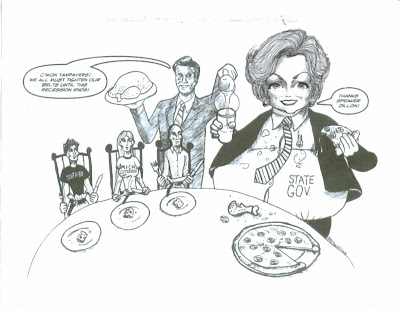 Which brings to mind another issue. You know we support the right of ballot initiative but we do not support the right to be deceptive. This message goes across party lines and should be important to all. The video below does a good job of explaining the problem.

If this was not enough to worry about, in 2010 some will be calling for a Constitutional Convention. Say no to that too.
Posted by WCTaxpayers at 7:39 PM 1 comments

In Pursuit of Justice

Secretary of State Terri Lynn Land, in her official capacity,
Andy Dillon, and Wayne County Board of Election Commissioners

On June 6, a Complaint For Writ of Mandamus was filed in the Court of Appeals to recapture signatures which are valid as found by the US Supreme Court. If found to be invalid it would would violate citizens First Amendment Rights of free speech and association. This would give us more than enough signatures to place the question on the Aug. 5th ballot.

In addition, we are also challenging the practice of throwing out both signatures when someone signs twice by accident. For years the opposition has been thought to be signing petitions more than once to throw off the count. In 1983 when we were attempting to recall Senator Patrick McCullough, we had enough signatures to recall him from office for his vote for a 38% increase in the income tax. Due to duplicate signatures, where both the original and the duplicate were thrown out, we were unable to place the recall on the ballot. We challenged it in the Court of Appeals but did not have the resources to challenge it any further. We now have the opportunity if the Court of Appeals does not drag their feet.

On the face of the petition, is this warning in bold print: "A PERSON WHO KNOWINGLY SIGNS A RECALL PETITION MORE THAN ONCE OR SIGNS A NAME OTHER THAN HIS OR HER OWN IS VIOLATING THE PROVISIONS OF THE MICHIGAN ELECTION LAW."

We believe that over a three month period people can honestly forget if they signed a petition. We still have the presumption of innocence in this country. We agree that one of the signatures should be discounted but only one. In any case, we should not allow the disenfranchisement of voters for political expediency. Hopefully we will prevail.

TO BE CONTINUED.
Posted by WCTaxpayers at 11:22 AM 0 comments

When the Constitution of the United States was ratified, a colleague asked Benjamin Franklin, “What have we wrought?”

Benjamin Franklin replied, “A Republic, if they can keep it.”

I have not been writing lately because I am not sure what to tell you. We are still fighting to save the recall of Andy Dillon. As soon as I know what is next, I will let you know. The one thing I do know is that I am fearful for this country. I have seen things in this campaign that are unprincipled, dirty and beneath those who propose to represent the people of the 17th district. I can not believe that we are the only place in this country that have had these experiences.

We can not excuse this by brushing it off as just politics. If this is politics, it has no place in our form of government. We have lost respect for each other, our first amendment rights have been violated and breaking the law is not justified to achieve a goal. No matter what happens we will ultimately wind up in court.
Posted by WCTaxpayers at 4:02 PM 4 comments