Why We Can't Trust WCCC 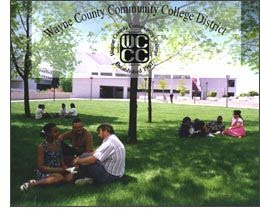 On November 4, 2008 you are being asked to renew a millage for Wayne County Community College. Renew? They are asking for 1.25 mills. Right now they are levying .99 mills. Isn't that an increase? You bet it is. They are asking you to give up everything you have gained under the Headlee Amendment for the last 8 years. How can they get away with calling this a renewal? It's Wayne County that's how. This is in addition to the to, the 2001 voted operating millage which is now being levied at a rate of 1.4861 mills.

The Headlee Amendment works basically like this, revenue can increase at only the rate of inflation plus any additions and deletion of taxable value at the local level of government. If revenue increases over that, the mills levied must roll back to generate the inflationary amount or must be placed before the voters to override . WCCC thinks this slight of hand is justified because they believe it is good for us.

Keep in mind that a number of their courses are remedial. The inference is that the 12 years of education we paid for previously is not sufficient. Below is information taken from a website.

What are the typical tuition costs and fees for attending Wayne County Community College District?

Posted by WCTaxpayers at 1:16 PM 0 comments 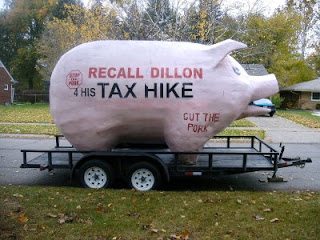 Perks the Pig stopped by my house to tell me that he has been reading the literature that Rep. Andy Dillon has been distributing. Apparently, Dillon thinks he has cut taxes and cut the budget. I am really sorry to add delusional to his faults.

Everyone in this state is suffering and all he can do is make things up. He attacks his opponent, Sandra Eggers, and disguises the truth. I guess working to get elected by going door to door meeting voters in the district every day and her willingness to debate him, while he refuses, means that she is not a serious candidate according to him. At least, thats what he says in his literature. I think she is as serious as pneumonia. She is also hardworking and honest. It's refreshing in a politician.

If recalled, Dillon will be the first Speaker of the House recalled anywhere in the country. We have been working on this more than a year - in and out of court. We are doing this for all the people of Michigan. Our legislators should not take us for granted. They should show us respect. They should learn that they work for us, not themselves. Think of the recall as a teaching tool. A ruler to smack the hands of our politicians and I don't much care if it hurts their self esteem. The people of this state need to take their government back from the lobbyist and special interest. We need someone to stand for us. I need someone to represent me. Dillon is my representative and he must go.

If anyone is free this weekend and would like to help us distribute literature in Redford Twsp, Dearborn Heights and a small portion of Livonia, please contact us at 313-278-8383.
Posted by WCTaxpayers at 4:54 PM 2 comments 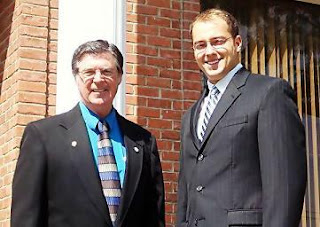 I congratulate the people of Redford Township for their decision to replace Miles Handy as township supervisor. Now is the time to make another good judgement about who should be your treasurer. It is time for the people of Redford to take their Township back. You will have a choice in November to elect a name under the Democratic ticket or an Independent with qualifications for the job.

Being Commissioner Phil Cavanugh's wife is not a qualification for treasurer. Apparently, even Robert F. Brag Jr., Redfords present treasurer thinks Paul Borland would do a better job. That's him in the picture along with Paul. Below are Broland's promises.

As an Independent Candidate on the November ballot you can rest assured that I will bring my business and leadership experience along with my education, to the Treasurer’s Office.
I’m not from a family of politicians and I do not represent any one party’s agenda. As Redford Township Treasurer I will represent democracy in its purest form, government for the people, by the people.
As your Treasurer I Pledge to:
And most importantly

He said it, now Reford Township should hold him to it.
Posted by WCTaxpayers at 11:37 PM 2 comments 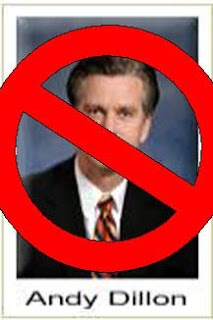 Following the route that Mapquest gave us was interesting and beautiful. It took us through the mountains which were in bright fall colors. It almost didn't look real it was so beautiful. I am grateful for the scenery but the directions to the AFP , Defending the American Dream Summit stunk. Coming home from Washington, we took the highway all the way back and the scenery was still beautiful but the directions were far more clear and direct. All in all, it was a great experience and the conference was worth while and a success.

A lot of familiar faces were missing due to this being an election year. Even I felt guilty going away because of the Recall of Speaker Andy Dillon. I have to say that it was worth it. It refreshed me after a year of fighting to get the recall on the ballot. It provided me confirmation why this recall is so important. It reminded me that other states, even in these hard times, are doing incredibly better than Michigan and that we need to take steps immediately. The first step, is to notice up our governor and legislators by removing Dillon from office.

If anyone has a little extra cash, please send your donation to Taxpayers to Recall Andy Dillon, 25613 Rouge River Dr., Dearborn Heights, MI 48127. We appreciate any amount how ever small.
Posted by WCTaxpayers at 12:11 PM 0 comments

I am sitting in a room full of bloggers. Not all of them are writing, but it sounds like they are all talking. Outside the room they are talking as well. They are on a break from an interesting conglomerate of speakers. Last night George Will, Dinesh D'Souza, Ed Meese and more gave tributes to Ronald Reagan and free market economy. The hotel is filled with about 1800 enthusiastic conservatives that still believe there is a future for capitalism.

This morning the list of speakers was equally impressive. John Stossel from ABC 20/20, Fred Barnes of the Weekly Standard, Steve Moore and John Fund from the Wall Street Journal, Herman Cain radio talk show host, Grover Norquist from Americans for Tax Reform (and the list goes on) gave insights into what we should be doing. Fannie Mae and Freddie Mac are perfect examples why the Federal Government should keep out of our business. (Do you really want these people to take care of our health insurance?)

I'm off to my next conference. Hope to get into more detail later.
Posted by WCTaxpayers at 5:35 PM 0 comments 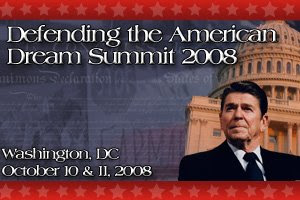 I am writing to you from the Americans For Prosperity Conference in Arlington, Virginia. We had conferences about blogging and networking and then eminent domain, land development and environmentalists. That's a heck of a lot for a morning. The next event is the Capitol Hill Rally and news conference.

There are hundreds of people who have not arrived yet. How do I know? Because there are tables loaded with name tags that have not yet been claimed. I'm hoping to be able to give you more information direct from the conference today and tomorrow. The speaker's list is impressive. I know you will be sorry you missed it. People here are real friendly. Strangers come up and talk to you. The mood is light in spite of the gloomy economic climate. As things come up along the way I'll be back to you. There is an impressive list of speakers. I'll be reporting on them later on today. In the meantime, make an effort to do something important while I'm away.
Posted by WCTaxpayers at 12:49 PM 0 comments

Posted by WCTaxpayers at 12:49 PM 0 comments

The night was dark, cool and still. The Dearborn Heights council chamber was pregnant with anticipation. The candidates for the 17th district were beginning to exhibit anxiousness for the debate to begin. Andy Dillon the smooth talking villain vs Sandra Egger friend to the rich and the begger , were sizing each other up. The Dearborn / Dearborn Heights League of Women Voters were preparing the order of their questions.

Without warning, Team Handy spread themselves throughout the chamber. For those of you who are not familiar, they are a group of politicians and supporters from Redford Township. Among them, was Miles (Boss Hog) Handy, the recently (thank goodness) defeated township supervisor. Along with him was county Commissioner Phil Cavanaugh, the fire chief, Cavanugh's wife, who though unqualified, is seeking to be treasurer of Redford, all in all there were about 15 of them.

As they swaggered in, they had a smug and confident look on their faces. I have yet to understand how Dillon became an underling in Team Handy, given his position as the Speaker of the State House. What I did notice is that some of them behaved like children who thought that making faces gave them bravado.

Dillon appeared uninterested. Egger appeared nervous. The questions where asked. Dillon lied with a straight face. He continued to pretend he cut the budget by $400 million when it was the proposed increase that was cut. Egger nervously gave her answers but she remained true to herself and the taxpayers. Dillon tried to to impress with his fancy words and composure. Egger spoke with sincerity and conviction.

In the end, in spite of their cockiness, the Redford Ruffians settled for a hamburger and a drink at a local bar instead of a pint of blood.
Posted by WCTaxpayers at 7:01 PM 1 comments