Assaulted On Every Side.

On July 15, President Obama came to Macomb County Community College to again tout one of his expensive initiatives. While he spoke of his plans for our money, outside along 12 mile, protesters gathered to express their dissatisfaction with many of his policies. Opposition to his healthcare policies, Cap and Trade, the bailouts and some wanted to audit the Federal Reserve to find out where our money went.
There was very little coverage and some say Obama didn't even know we were there. That may be true, but the people driving along 12 mile knew we were there. We can't control the media but we had the support of many who drove by.

On the State level the 2010 budget is expected to be $1.7 billion in defecit. Speaker Andy Dillon has come up with changes to public sector healthcare reform which would take care of $900 million but chances of them passing are as good as they are when others presented them before.

Chances of increasing revenue anytime soon are slim and none. The exodus from the state due to bad policy and tax increases does not bode well for those of us who remain here.

On the local level you can expect to see an increase in "truth in taxation hearings" over the next two years. Due to the decline in property values local units of government revenue can decline. They can increase millages to adjust revenue up to the rate of inflation just by holding a hearing. It can not exceed the voted millage. So while you are experiencing job loss,wage cuts and decline, the value of what may be your biggest investment. Elected officials can increase their revenue and overide the Headlee rollback just by getting together at a public meeting and agreeing on it.

It is time for you to stand up and be heard. Make your feelings known to those who are supposed to represent you.
Posted by WCTaxpayers at 11:25 PM 0 comments

America's doctors and medical institutions are the envy of the world. The level of expertise and the pace of innovation in U.S. health care are unmatched. Yet many Americans worry whether they will have access to medical care when they need it. The present health delivery system does have some serious issues. Many Americans lack health insurance, there are gaps in coverage, and costs are increasing at an alarming rate. Health insurance is usually not portable from job to job, and consumers have very little choice about what their insurance covers. Many of these deficiencies in the present system are the result of government regulation.

President Barack Obama has begun an intensive public relations campaign with the media and the American people, to promote his “public option”. He has asked Congress to draft the legislation, but called for it to encompass three basic principles:
1. The rising costs of health care have to be brought down.
2. Americans have to be able to chose their own doctor and their own plan.
3. All Americans need to have quality, affordable health care.
The President must know that these goals are impossible to achieve in a government run plan.

Unfortunately, most Americans don't pay much attention to the details. With the implied promise of something for nothing, and few alternative solutions offered, Obama has many supporters. Most of them are unaware that every where this has been tried, it has increased the cost of health care and lowered the quality of care. The innovation, high quality and advanced treatment techniques that characterize our current system would be degraded. Rationing of care, especially at the end of life, would become the norm.

To see government health care at work we don’t need to look at Canada, Cuba or Great Britain; fifty nine million Americans already have it. It’s called Medicaid. Medicaid was passed in 1965 to provide health care for poor Americans. Government, both federal and state, pay for it. A recent study cited by Dr. Scott Gottlieb, a physician and health care expert at American Enterprise Institute, showed Medicaid patients to be 50% more likely to die after heart bypass surgery than patients with private coverage or Medicare.

Obama’s proposed plan would be an insurance program designed to compete with private insurance. It would be funded by taxpayers, administered by Washington, and open to everyone. President Obama claims people would not be forced to change their doctors or their coverage. He denies trying to push people into a government-run plan, but employers and state governments with private plans will soon realize it's less expensive to move employees into the government plan than to continue private coverage. Obama Care will soon become the single dominant health plan, which is its political purpose.

The Lewin Group, a health-care policy research and consulting firm, estimates that a public option could result in employers switching up to 120 million Americans from their current coverage to government-sponsored coverage to reduce costs. Thus a public plan, especially if combined with a mandate on employers to offer government coverage or pay a tax, would mean that millions of Americans would be pushed out of the private coverage they have today.
Like Medicare, the Obama Plan will control spending by using its purchasing clout and political leverage to dictate low prices to doctors. Physician income declines will be aggravated by regulations that will make practicing medicine more costly. Doctors will be required to employ expensive electronic prescribing tools and computerized health records, and will be encumbered with rules requiring expensive staffing and documentation to show compliance.

With last fall’s bailouts, the government spent almost $1 trillion. This year’s stimulus package cost even more. Can we now afford the price tag for an “Affordable Health Choices Act”, the name given to the recent Kennedy-Dodd health care bill? Last Monday, the Congressional Budget Office estimated the cost of the Kennedy-Dodd health care plan at $1 trillion. Supporters of the plan complained that the estimate was based on a preliminary plan that was incomplete. Since that time the cost estimates for the plan have been upped to $1.6 trillion. The government already owns much of the banking industry and two major automakers. Do we now need to give it control of another 17% of the economy?

In a recent Wall Street Journal Opinion (June 8, 2009) the writer offered the following:
“Increasing cost-sharing would discipline the health spending curve and give it a more rational bent. As societies grow richer, it makes sense that people will invest more in their own well-being. Health is a superior good, while the utility of wealth is fairly low if you're dead. The U.S. health cost "crisis" is that we spend so much with no incentive to weigh the costs against the benefits.”

I couldn’t agree more. In 1960, the average American paid more than 60% of his health care out of pocket. Health care spending has since increased sevenfold, but the percentage that consumers pay directly is now less than 12%. It is unrealistic to believe that health care will become less expensive because the government is paying for it. When people aren't exposed to the true cost of their care they consume more care. The real solution to the health care dilemma is to give consumers more control and more responsibility for their health care choices.
Posted by WCTaxpayers at 10:23 PM 0 comments 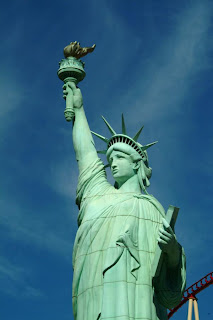 Posted by WCTaxpayers at 11:20 AM 2 comments

theblogprof: 32 of 46 States Whose Fiscal Year Begins July 1 Do Not Have A Budget

theblogprof: 32 of 46 States Whose Fiscal Year Begins July 1 Do Not Have A Budget
Posted by WCTaxpayers at 3:12 PM 0 comments