The Allen Park Emergency Manager
recently released a video of FAQ’s to
answer some “Frequently Asked
Questions” about the 6¾ mill tax increase
she has placed on the August 6th ballot.
State law does not permit public officials
to use tax money to advocate a tax
increase so the questions and answers
were carefully selected. 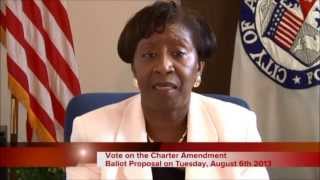 But before you vote on August 6th you should also consider the Frequently Avoided Questions
Q. How much will this millage cost the average Allen
Park homeowner?
A. As our Emergency Manager says: 74¢ a day. But
thinking of it as “less than the cost of a cup of coffee
or a soft drink” is, ironically, exactly what financial
planners warn people against doing! This tax increase
will cost the average homeowner $270 per year —
$2700 over the ten years it will last. Or to put it in the
most familiar context, an additional $22.50 a month
into mortgage escrow for the next decade. Assuming,
of course, a house with an SEV of $40,000.

Q. Will this millage go exclusively to providing police and

fire services?
A. That is a meaningless distinction. The city has only
two checkbooks -- one for water and sewerage and
the other for everything else. The basis of the claim is
that since 6¾ mills will generate almost $5 million in
annual revenue while expenditures for public safety
are more than twice that amount, it can be said that
the money raised is being spent there. That, of
course, frees up $5 million that went for police and
fire services last year to be spent on other things. It's
the same shell game that was played on voters years
ago when they approved a state lottery on the promise
that the revenue generated would go to education.
Money is what economists call a "fungible
commodity.” Just as one glass of punch is like every
other one dipped from the same punchbowl, one
dollar is just like every other one taken from the same
general fund. There is no way to ‘earmark’ it.

Q. Are home values predicted to continue to decline?
A. Not unless recent trends suddenly reverse and values
start down again. The Zillow real estate website
shows current Year-over-Year selling prices for
homes in Allen Park at +12.4%. The Trulia website
puts the Y-o-Y number at +17.7%

Q. If this millage passes, will no additional tax increase
requests be made? Also, if fiscal stability is restored,
might this increase even be rolled back?
A. Both are speculations, not commitments. There is
nothing in the proposal that even hints at either one.

Q. If this millage proposal fails, what changes in city
services can residents expect as a result of the fallback
"Plan B"?
A. That's impossible to say. However, whether or not the
dire predictions are a 'scare tactic’ as some have said,
consider the warnings from public officials before the
last proposed millage increase — that if it did not
pass, the city's recreation center would close. The
millage failed. Stop by the rec center and interrupt all
the activities there to ask if it’s closed.

Q. Isn't that because operation of the rec center was
given over to a private company?
A. Indeed. And that certainly suggests what will actually
happen if this millage fails. At the top of the list of
services ripe for turning over to a private provider is
EMS. In this era of fireproof everything and smoke
detectors in every building the function of the fire
department has become primarily providing an
ambulance service. This doesn’t require a full-time
staff of 28 and such expensive equipment as, for
example, our 100-foot ladder truck. (In fact there is
the only one building in the entire city tall enough
where this specialized vehicle could ever even
possibly be needed -- which is probably why the only
action the truck has ever seen is in parades.)

Q. What has been done to reduce the $3 million per year

cost of providing health insurance for the city's 220
retirees?
A. Nothing yet. However, beginning in the new fiscal
year prescription co-pays will be increased to $10 for
generic drugs, $20 for preferred brand name drugs
and $30 for all others — from long-standing co-pays
of $1, $2 and $5 respectively. In addition both
current and reired employees will begin paying 20%
of the premium for their health insurance plans (that,
incidentally, will provide coverage that — like the copays
— will be closer to what most taxpayers have.)

Q. Have current employees been switched over from
"Defined Benefit" pensions to 401(k) type "Defined
Contribution" pensions?
A. No. And even though this — along with the goldplated
health insurance plans — is what bankrupted
two of the Big Three, it isn't clear how or when the
transition even can be made. Although government
employees — city and county, along with teachers —
are the only workers who still have this open-ended
benefit, ever increasing life-spans have made the cost
of funding it so enormous that the system cannot
afford to allow current employees to rto redirect
retirement savings into their own 401(k) accounts.
The contributions they make under the current
system are essential to continue paying benefits to
retirees.

Q. Hasn’t anything been cut from this year’s budget?
A. Yes. Pay for the mayor and council was cut by 50%
for an annualized savings of $24,000 and curbside
pick-up was transferred from DPS to trash contractor
Republic Services for an additional $200,000 per year.
A.

Q. Do appointed city employees really get 90 days of
annual sick leave?
A. Yes. Though that three months of sick time per year
will be changed to 12 days per year beginning with
the next fiscal year.

Q. Has the pension "spiking" been stopped?

A. No. Though this is something else that is scheduled
to be eliminated next fiscal year. In the meantime,
however, at least three — and perhaps more — city
employees will be using the (borderline fraudulent)
tactic of banking all of their vacation, comp time and
unused sick days to and converting them into cash to
enhance their last year's salary. The 2.9 pension
multiplier is then applied to this artificially inflated
pay scale to calculate their retirement benefit — a
“spiked” amount they will then draw for the rest of
their lives.

Q. 2.9 multiplier? Isn't that higher than average?
A. Higher than average? It is the highest in the entire
state! It is double the typical 1.25 to 1.5 range.
Adjusting it down to 2.25 is another change to begin
next year. Strangely, this is still 50% higher than the
1.5 pension multiplier that is part of Governor
Snyder’s “Best Practices” program for local
governments. Perhaps we can get our EM to confer
on this with the person who appointed her.

The Bottom Line
Our experience with an Emergency Manager makes you wonder why people were so worried about giving an unelected official so much power. The Allen Park E.M. has done almost nothing to address our structural deficit. No property sold. No bonds renegotiated. No consolidation of services with other cities. No staff reductions. Not one provision of one labor contract has been revised. The only
substantial steps she has taken is to borrow another $2 million, and then put a proposal on the ballot to raise taxes by $5 million a year for the next decade.

They will only raise our taxes as a first resort!I
I need both the funding and some volunteer help to do the lit drop the week before the election.

Any help you can offer -- or point me to -- with either or both will be greatly appreciated.