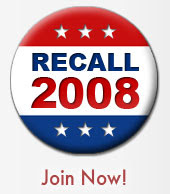 I am frequently asked why recall is necessary when our elected state officials are term limited and will be up for re-election or moving on. The most important thing I could say is that a lot can happen in six months. It did not take them six months to raise our income tax 12%. It did not take them six months to enact a 22% surtax on business. ( May I remind you that the tax gets passed on to the consumer.) It took them less than six months to increase General Fund spending more than 8% for 2008. They succeeded in increasing the legislative budget by over 7% for 2008 in less than six months. Now add to that the cost of borrowing money at 40 cents on the dollar for the failed 20th Century Jobs Fund in 2005, which was a flop, and will take a long time to pay back with future revenue.

The next question is always ," What about the cost of the election?" It is minor compared to the damage they can do. We need to set a few examples to deter others from making those kind of mistakes again. In my case, my legislator is the ring leader, Speaker of the House Andy Dillon. You remember him. He is the one who wanted to give every sixth grader and iPod. Rumor has it that should he be re-elected that he will be working on a gas tax hike soon after the election. Since things do not seem to be getting any better and they don't seem to be able to cut spending, then their only solution will be to use our money - thus another tax increase. Speaking of money, it will cost money for legislators to defend themselves against recall. They already use tax dollars to send out literature about how wonderful they are and how hard they work for us in their newsletters. Now they must spend more of their own to defend themselves and or to run for reelection.

If you are looking to get involved in a recall in Wayne County send me an email at bogaert@comcast.net . MichiganRecalls.com will be having a Recall Boot Camp soon. Taxpayers to Recall Andy Dillon will have petitions there or I can send you petitions if you live in Redford or Dearborn Heights. You can get other information at MichiganRecalls.com.
Posted by WCTaxpayers at 11:55 PM 3 comments

I Have Finally Made It 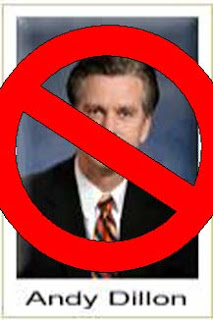 Apparently the liberal bloggers believe in free speech only for liberals. I have been banned from commenting on several liberal websites. MichiganLiberal.com at least gave me a reason. They say my opinion stinks. What are they afraid of? These sites make the same mistake as most of the media. They have no respect for any opinion but their own. I am thankful that we are not required to ask their approval to vote. The fact that I am attempting to recall my legislator, Speaker Andy Dillon, has liberals up in arms. That is why they stalled the approval of the petition language at the county level and lined the walls with thugs to intimidate us at the hearing. It took the efforts of the Circuit Court to admit that the language is clear and understandable.

Other recalls are experiencing harassment and intimidation tactics. That does not frighten me. We will be armed with cameras, video cams and cell phones to call the police. We can not allow the actions of thugs to deprive us of our right to petition for grievence and we will defend our rights. They blame Leon Drolet, from Michigan Taxpayers Alliance, for everything. Do they really think he can do this on his own?

There are large numbers of business people, economists and just average people who know what consequenses will result from the poor decision making in Lansing. It is our state, our lives and livelyhoods that will be effected. Rumor has it that they are not done raising taxes yet. It is our job to see that they are stopped. Through their newsletters, they are using taxpayer dollars to spread information about how good they are to distract from their distructive activities. If you want to help, please click on to michiganrecalls.com and give us a hand. We need to educate the legislature and remind them we are sovereign.
Posted by WCTaxpayers at 11:51 AM 6 comments

I took this video at the "Michigan Defending the American Dream Conference" put on by Americans For Prosperity. Please excuse the poor quality it was my first video and my first attempt with any video camera. I think the analysis is spot on. I would appreciate your comments. We must work together for a solution to Michigan's problems and remove those who stand in the way of saving Michigan's future. 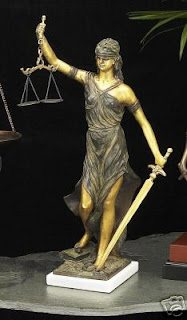 For the first time in memory I am thinking of not voting for a presidential candidate in the primary election. I'll still vote because there is a school sinking fund proposal on the ballot that I do not support. With a 16% fund equity in their piggy bank, I think they are crazy to ask me to pay 1.67 mils for 10 years. While Rome burned, they misspent the last time they got money. Now they say the district is falling apart. Am I stupid enough to give them more for 10 years. I don't think so.

As a result of the legislature Democrats and Republicans are throwing a party at which they control the invitation list. Like spoiled children they are only letting you come if you tell them who you like best. In the meantime, since there is another issue on the ballot, three ballots have to be printed. One with the Republican slate and the ballot issue, One with some of the Democratic slate,since some are not participating, and one with just the ballot proposal. The worst of it is that, while it was challenged in the courts, it was upheld that the parties could get the voting information but the public could not, even though the public was forced to pay for the election. Other Parties were restricted from participating.

The whole concept is so blatantly unconstitutional, I can not believe that our State Supreme Court upheld the election. Partisan politics has consumed this country. Here in Michigan it has done the most to hurt this state. It has hurt our economy and crippled our constitution.If you can not get justice in the courts, the system has truly broken down. I believe the Justices should truly be ashamed of themselves and I wish them a thousand nights of restless sleep and a failure to return to office.
Posted by WCTaxpayers at 7:00 PM 0 comments