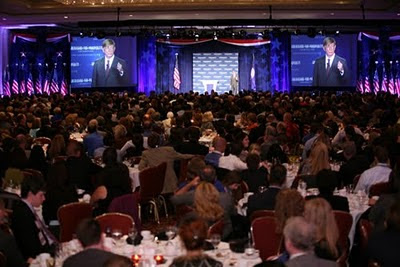 I am blogging to you from AFP's "Defending the American Dream Conference" in Washington D C. Great speakers and breakout sessions today. This morning we heard from, among others, Dick Morris, author and Fox News Contributer and Herman Cain, radio host and commentator.

Before and after the speakers were breakout sessions covering everything from soup to nuts. Six sessions with four choices to choose from in each session. Things like economics, media, repealing Obamacare, free speech, global warming, and on and on.

During the "Tribute to Ronald Reagan Dinner", we heard from, among others, George Will conservative columnist and Congresswoman Michele Bachmann

I also got to see old friends who have moved on and out of Michigan. All and all a good event with over 2500 people attending.

Tomorrow is the "Restoring Honor Rally" at the foot of the Lincoln Memorial which was called by Glen Beck of Fox News. It should be interesting.
Posted by WCTaxpayers at 9:59 PM 0 comments

Which nut has your money?

Please pass this on to those you know in Dearborn Heights.

As a resident of Dearborn Heights you may be aware that in 1965 the voters adopted PA 345 of 1937, which allows for a millage in order to pay for police and fire personnel retirement benefits. Over the years, generous contracts with the promise of exceptional retirement benefits have been negotiated for Dearborn Heights police and fire personnel and the taxpayers have shouldered the costs for those benefits based on the vote of residents in 1965.

IF YOU DON’T WANT YOUR PROPERTY TAXES TO INCREASE PLEASE READ BELOW AND TAKE ACTION!

Please pass this along to your neighbors.

Three years ago during contract negotiations the City agreed to what is known as a DROP program (deferred retirement option plan). This program encourages police and fire personnel who are nearing retirement age to take an early retirement, thus moving the liability for their benefits off the regular City personnel budget and to the taxpayers through the police and fire millage provisions in PA 345. Once the burden of these employees’ benefits are moved off the City of Dearborn Heights’ books, the city frequently rehires the same personnel back as contractors.

The intent of PA 345 was to continue to support our city’s heroes once they have retired. That’s not what is happening today. Today, the City of Dearborn Heights is playing a shell game with your hard-earned tax dollars to fund EXISTING police and fire personnel benefits so they can make room on the city’s books for other expenditures.
In other words, while everyone else is figuring out ways to make the hard decisions in their personal budgets during this painful recession, the clever politicians at the City of Dearborn are simply moving liabilities off their books at the expense of the taxpayers through a loophole and NOT asking the taxpayers if they’re willing to support this.

Add to that the fact that in a down economy the investments and interest payments to the PA 345 funds are low, meaning the taxpayers must put more in to fund the liabilities. The millage this year alone increased by $2.30 for every $1000 in taxable property value, and because the recently arbitrated contract extends the DROP programming that millage rate is certain to continue to increase.

What does all of this mean in the real world? Former City of Taylor Mayor Cameron Priebe estimated that the PA 345 provision in their city meant that each retiree currently costs the taxpayers of Taylor more than $4.5 million (they currently have around 100 police and fire retirees). In Taylor, residents paid 1.2 mills in 1979 to support the PA 345 provisions; today they pay 6 mills and that number is expected to increase substantially. What does that mean in dollars and cents? A single resident in the City of Taylor with property valued at $150,000 will pay $450 this year just to support the police and fire retiree benefit provision of PA 345.

We MUST reign the liability of this fund in NOW. We can continue to support the retirements of the men and women who risk their lives to protect us within the provisions of PA 345, but the City of Dearborn Heights MUST get their house in order and stop using loopholes to shift the liability of the non-retired police and fire workforce to a millage provision.

Tell Dearborn Heights Mayor Daniel Paletko that you will support a referendum to repeal PA 345 if the DROP program is allowed to continue.

You can contact the Mayor of Dearborn Heights, Daniel Paletko, and city council in the following ways:
E-mail: dpaletko@ci.dearborn-heights.mi.us