Proposal 1
APPROVAL OR DISAPPROVAL OF AMENDATORY ACT TO REDUCE STATE USE TAX AND REPLACE WITH A LOCAL COMMUNITY STABILIZATION SHARE TO MODERNIZE THE TAX SYSTEM TO HELP SMALL BUSINESSES GROW AND CREATE JOBS
The amendatory act adopted by the Legislature would:
1. Reduce the state use tax and replace with a local community stabilization share of the tax for the purpose of modernizing the tax system to help small businesses grow and create jobs in Michigan.
2. Require Local Community Stabilization Authority to provide revenue to local governments dedicated for  local purposes, including police safety, fire protection, and ambulance emergency services.
3. Increase portion of state use tax dedicated for aid to local school districts.
4. Prohibit Authority from increasing taxes.
5. Prohibit total use tax rate from exceeding existing constitutional 6% limitation. Should this law be approved?
************(*
I want to state that the Personal Property Tax is a horrible tax and a burden to business and employment. If I were to say to the average taxpayer that their stove, refrigerator, washer, dryer and any other appliance or furniture were all subject to personal property tax for 10 years after purchase with a reduction each year for depreciation, we would have a revolt.
Anyone wishing to understand how the tax works and its effects can go to Personal Property Tax Reform in Michigan The Fiscal and Economic Impact of SB 1065-SB 1072, Anderson EconomicGroup  http://www.andersoneconomicgroup.com/SearchAEG/tabid/59/articleType/ArticleView/articleId/8021/Personal-Property-Tax-Reform-in-Michigan-The-Fiscal-and-Economic-Impact-of-SB-1065SB-1072.aspx or the Citizen Research Council at  https://crcmich.org/TaxOutline/index.html
This is not just an elimination of the Personal Property Tax for some small businesses. It is about much more.  It is my estimation that it was not necessary to place anything on the ballot to allow the reduction of that tax. Everything they needed is presently included in the State Constitution as defined in the Headlee Amendment.
Article IX  Michigan Constitution
§ 25 Voter approval of increased local taxes; prohibitions; emergency conditions;
repayment of bonded indebtedness guaranteed; implementation of section.
Sec. 25. Property taxes and other local taxes and state taxation and spending may not be increased above the limitations specified herein without direct voter approval. The state is prohibited from requiring any new or expanded activities by local governments without full state financing, from reducing the proportion of state spending in the form of aid to local governments, or from shifting the tax burden to local government. A provision for emergency
conditions is established and the repayment of voter approved bonded indebtedness is guaranteed.
Implementation of this section is specified in Sections 26 through 34, inclusive, of this Article.

§ 26 Limitation on taxes; revenue limit; refunding or transferring excess revenues;
exceptions to revenue limitation; adjustment of state revenue and spending limits.
Sec. 26. There is hereby established a limit on the total amount of taxes which may be
imposed by the legislature in any fiscal year on the taxpayers of this state. This limit shall not
be changed without approval of the majority of the qualified electors voting thereon, as
provided for in Article 12 of the Constitutio n……. If responsibility for funding a program or programs is transferred from one level of government to another, as a consequence of constitutional amendment, the state revenue and spending limits may be adjusted to accommodate such change, provided that the total revenue authorized for
collection by both state and local governments does not exceed that amount which would have
been authorized without such change.

There are 10 Senate Bills connected to this proposal. Nowhere in the ballot language is a Personal Property Tax mentioned specifically. The bills range from SB821 through SB830. For brevity and simplification I will address SB822 which must be passed for most of the others to take effect.
.

We start our problem with the establishment of yet another Authority which would be granted enormous power. Since this new Authority would not be elected by the voters, there would be no true accountability but they would have the responsibility of handling a huge amount of our money.
“BEGINNING ON OCTOBER 1, 2015, THE SPECIFIC TAX LEVIED UNDER SUBSECTION (1) INCLUDES BOTH A STATE SHARE TAX LEVIED BY THIS STATE AND A LOCAL COMMUNITY STABILIZATION SHARE TAX AUTHORIZED BY THE AMENDATORY ACT THAT ADDED SECTION 2C AND LEVIED BY THE
AUTHORITY, WHICH REPLACES THE REDUCED STATE SHARE AT THE FOLLOWING RATES IN EACH OF THE FOLLOWING STATE FISCAL YEARS”

The state then declares the revenue portion from 2015-2016 through 2029 without knowing the accuracy of the amount listed. They will also be committing future legislatures to a dollar amount.
This Authority would be granted an enormous responsibility. That cannot be good for taxpayers.  The line in the proposal that limits the used/sales tax to 6% does not address the expansion of the sales tax to, for example, internet purchases or fines or penalties for failure to comply. It does not address other things that they may choose to include as taxable by the sales tax which they seem to think they have the authority to adjust.
Whatever your feelings on taxes, this proposal does not give the taxpayer more security. The language does not reflect the full nature of the outcome if it passes.  If you have concerns, I will be glad to forward copies of the bills.  Please feel free to contact me with any questions or comments.  wctaxpayers@comcast.net .  313-278-8383.

The Wayne County Taxpayer Association suggests vote NO on Proposal 1

Posted by WCTaxpayers at 9:28 PM 0 comments

I am sorry to announce that the Part Time Legislature Committee has informed me that they will not be able to collect enough signatures to place the issue on the ballot. For the hundreds who received petitions from the Wayne County Taxpayers Association﻿  I am asking that you destroy the petitions.  It is their intentions to try for the 2016 elections but those petitions you have are dated and can not be used. There are a number of reason why they were not successful but they hope to have those problems worked out for the 2016 election.
Posted by WCTaxpayers at 3:49 PM 0 comments 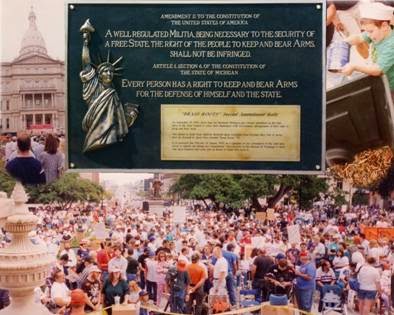 On September 25th,1994 the Jon Coon, Libertarian for US Senate campaign hosted a "Brass Roots" rally, honoring both the Second Amendment to the US Constitution and Article I, Sec. 6 of the Michigan Constitution. The 10,000 Michigan gun owners who attended contributed hundreds of pounds of spent brass "from firearms they vow to never give up" that was melted down and cast into a 4' x 6' plaque.

Shortly after its creation, state representative, Leon Drolet, got legislation to install the plaque on the Capitol grounds adopted by the House on a 104-0 vote.  Unfortunately, the bill was not taken up by the senate.

We are now making a second attempt to finally put this monument to our cherished right to keep and bear arms in a deserved place of honor -- where it will serve as a continuing reminder to both public officials and the public generally of the one right upon which all the others depend.

Rep. Martin Howrylak, along with 15 cosponsors, has introduced HB 5595 to accomplish this long-sought goal -- hopefully in time for a dedication ceremony on the 20th anniversary of the original "Brass Roots" event.

Any help you might provide in this effort would be greatly appreciated.  Please take a moment to call your state rep and urge support for HB 5595.  Then forward this e-mail to every other Michigan gun owner you know.  Thank you.

Yours for liberty from one who was there,