So Broke They Can Give It Away 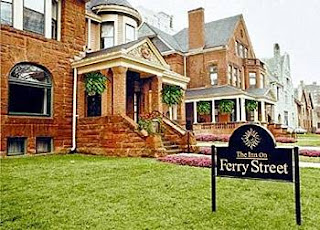 Ray Byers, Wayne County’s chief development officer  should be hiding instead of promoting the millage for the DIA.  While he is traveling all over the world on our money, the DIA continues to be mismanaged. He must think he is still at Ford Motor Company.  The County should take care of its own business first.  Have you read the newspaper lately?

The DIA donated some of their buildings to the  Ferry Street Inn."The Inn was developed by Midtown Detroit, a non-profit planning and economic development agency. The group partnered with the Detroit Institute of Arts (DIA), which owned the property and had been using some of the old homes for storage."

Notice they can afford to give their assets away.  It is being run as a non profit. You can bet those running it are making money.  How about running it for a profit and donating the profits to support the arts?

They are still touting the demise of the DIA in spite of the $150 million endowment they have on hand. The admission fees to the general museum are:


These fees can be raised and they have billions of dollars worth of art that can be placed on  tour and others that were just donated for a tax write off that can possibly be sold.

Don't be a fool Vote NO August 7.
Posted by WCTaxpayers at 2:33 PM 0 comments