I could not wait to post this. I found it to be incredibly funny.
I now know why Redford's Supervisor Miles Handy "oinked" every time Mr. Perk the nine foot pig went past the park where he was holding his pro Dillon Rally. He loved pigs just like Loraine Bobbit loved her husband.

Speaking of funny, I who as a child took something from a store and had to go back and pay for it because my conscience bothered me, have been served and must go to court on May 5th. Apparently, I deceived all of the stupid voters of the 17th district, who obviously don't know their own mind and should be grateful to have our elected officials fleece them. I am supposed to have hired deviants from Detroit to twist their arms to sign a petition. It will be interesting to see them try to prove the impossible. Why? Because it is not true.

Posted by WCTaxpayers at 6:30 PM 1 comments

Take a look at this video. This was our Rally in front of the Redford Post Office on tax day April 15. The only thing the police forgot was the water cannons. I don't think we look very dangerous. You be the judge. They did everything they could to make it difficult for us. I especially like the paddy wagon.

Posted by WCTaxpayers at 1:29 AM 2 comments

I hate to keep bugging you, but you have to read our latest press release:

REDFORD TOWNSHIP, MICHIGAN – A felon convicted of multiple violent crimes is roaming the streets seeking to intimidate voters on behalf of Speaker of the Michigan House of Representatives Andy Dillon (D-Redford Township). “Residents of Speaker Dillon’s district are being confronted by a convicted armed robber,” said Leon Drolet, Executive Director of the Michigan Taxpayers Alliance. “On behalf of the law abiding citizens of Redford Township, Dearborn Heights and Livonia, we demand that Speaker Dillon remove this convicted felon from his entourage of thugs.”

Marcell L. Mitchell, a so-called “Voter Education Specialist” employed by the Michigan Democratic Party, has an extensive record of felony convictions including Armed Robbery, Assault with a Dangerous Weapon (Felonious Assault), and Felony Firearms according to the Michigan Department of Corrections web site. He is currently a parolee under supervision until May 2nd, 2009.

“We are alarmed that Speaker Dillon and Michigan Democratic Party Chairman Mark Brewer would use felons convicted of violent crimes to intimidate voters from signing recall petitions,” said Rose Bogaert, Chairperson of the Wayne County Taxpayers Association and a Dearborn Heights resident. “Dillon’s thug tactics against recall petition circulators include a pattern of harassment, stalking, and other forms of intimidation. We understand Dillon’s personal reluctance about being recalled for raising taxes in Michigan. Must he use felons convicted of violent crimes to scare off potential recall petition signers?”

“The real irony is that there is no record of Mitchell ever voting,” Drolet said. “Dillon and Brewer might want to call their army of thugs and bullies something else when ‘Voter Education Specialist’ aren’t even registered to vote. What is Mr. Mitchell’s 'specialty'? Intimidating seniors wanting to sign a recall petitions? Voting doesn't seem to be one of Mr. Mitchell’s areas of expertise.”

The recall effort was launched in February of 2008, after House Speaker Andy Dillon voted in favor of two House Bills that increased taxes; HB 5194 raised the state income tax from 3.9% to 4.35% and HB 5198 imposed a new 6% sales tax. Recall organizers must collect over 8,700 valid signatures by May 1st to place the measure on the ballot.

Profile on Marcell Mitchell on BlockersRus.com

Posted by WCTaxpayers at 3:09 PM 0 comments

We had to go back to court today. The Redford Police were harassing us so bad that we went to court to get a restraining order. Circuit Court Judge William J. Giovan, who is the judge who heard the first case, listened to our request. He called the Redford Police Chief and told him that he was to inform his officers that they cannot try to intimidate and harass us no matter who gives the order. We suspect that the order came from none other than His Honor Miles Handy township supervisor. He also said that he would follow it up in writing.

Who would have thought it would get this nasty. Andy and his friends have gone over the edge. They are so desperate they will do anything. It will not do them any good. We are getting proof of their other violations, and when we do, we will prosecute. They have also disowned one of their thugs. As it turns out, he is a convicted felon (multiple times). He was involved from the very first.

We plan to file the petitions on May 1.
Posted by WCTaxpayers at 12:24 AM 2 comments 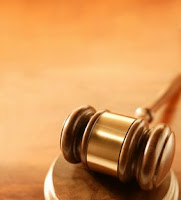 Is the Post Office a Private Or Public Monopoly? 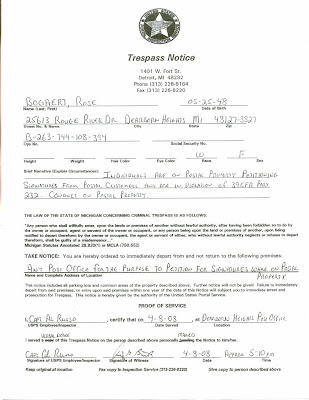 There was a nice disabled Veitnam War Veteran standing in front of a US Post Office collecting signatures to recall Speaker Andy Dillon from his seat in the Michigan Legislature for raising taxes $1.4 Billion. He was told he could not be there. So, he called me. When I got there I went in to speak to the postmaster of the Dearborn Heights post office. He said we could not be there. I thought this case was settled. I went out and started to collect signatures by myself. With the veteran watching in his car.

Along came a Dearborn Heights police car and tried to park out of sight. He never approached me, but he did watch. He left after seeing that I was disturbing no one. The Postal Police arrived. He says "You are breaking the law!" I say "what law?" "The postal laws" he says. This is private property and a private company. I say "this is a monopoly allowed by the government with my tax dollars. Now cometh two more Postal Police. They say they can ask for my ID, arrest me, write me a ticket or haul me off to jail. If this is not a government related facility by who's authority do they get to do all that? I called my attorney who said the Supreme Court remanded the case back to the Court of Appeals and the decision to allow us access has not been finalized. They threatened the vet who was in the car with the confiscation of his camera because he was taking pictures. Another friend came with a camera and never got off a shot because they were going to take his camera. This was entirely to Stalinesque for me. So I left. Represntative Beatram Johnson was lending his car out to the blocker at the post office that day.
If you read the trespass notice you will see that I am restricted from collecting signatures on Postal Property. With that in mind, I am inviting you to attend our rally on Tuesday, April 15, from 5:00 to 7:00 PM on the perimeter of the Redford Post Office. "Mr. Perks" the 9ft. pig will be there to greet you. Bring a sign if you can or get one from us. You had to work 189 days last year to pay federal, state and local taxes and it will be more this year. Come tell government to cut the spending, support the recall of Andy Dillon and tax us fairly.
Posted by WCTaxpayers at 4:35 PM 2 comments 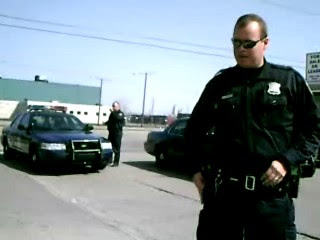 Once again I have been caught collecting signatures. This is getting to be a habbit of the Redford Police. They know I am not breaking the law. They know I am within my rights. They just can't get enough of me. They also think that they need at least two cars and police men to talk to me. This is the third time. I know they are just taking orders and it is not their fault. But you would think that they would know by now that I will not be intiminated. This time they told me I would get a ticket and took my ID. They went back to the car called there boss and told them I would not move because I was on the public sidewalk and not on the store owners property. I was not interfering with the exit or entrance by standing in front of the door. I was merely asking a question as customers were going in or out. No move. No ticket.
All of you need to help me "Recall Dillon". If I could I would also recall his friend Miles Handy the Redford Township supervisor. Now I just can't imagine how he got put in office. Redford residents have to rethink that guy. But I digress. You can help me and show your support by showing up at a rally on Tuesday, April 15, (you know what day that is) from 5:00 to 7:00 pm at the Redford Post Office, 12245 Beech Daly. Bring a sign and we can let all of the elected people we are tired of them wasting our money. As an added attraction, you and your children can meet "Mr. Perks" our 9 ft. foam pink pig. Please show up. You can probably meet the thugs in person. I want to meet some of them too. They seem to send all of the civil ones to me and call the police. Some of our other circulators have to file police reports against them because they do not play nice sometimes. Please Show up. We will be happy to see you there.
Posted by WCTaxpayers at 1:50 AM 1 comments