Another Day Older and Deeper in Debt. 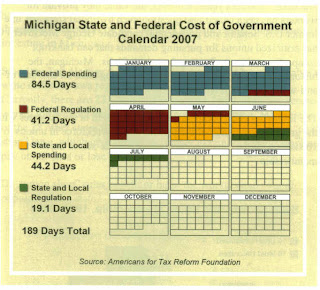 You have probably filed or are about to file your income tax. No matter where you are in Michigan you are still working for the government and will not be done until some time in July. In 2007 we worked 189 days to pay our federal, state and local taxes in Michigan as opposed to an average of 121 days for the rest of the states. This year it will be longer.

If money could buy good government, good education or good politicians we would be in good shape in this state. Everyone knows that government must have money to operate. I don't think you could find many that would dispute the fact. We are not talking about good government in Michigan we are talking about abuse.

Our roads are a jobs program for political donors and they can't even do a good job. Our education system is producing drop outs and illiterates in spite of the fact that per pupil spending has more than doubled since 1995. Our elected officials, not all of them, hold us in contempt. Most still think that they are entitled to all the perks and the taxpayers don't care or know the difference. They think they are the ultimate arbiter of who succeeds and who fails .

It obviously is not working. Our gross domestic product and job creation has declined consistently over the years. Once again, it is the reluctance to really change the way we do things. How much more can they expect from us? How can we follow if our leaders do not lead? We must remove those who refuse to change by recall or election. One at a time if need be, until the others pay attention. Many of us have lost our jobs, our homes and our children to other states. We have sacrificed enough for them. It is time for them to do their share, change and do what is right.
Posted by WCTaxpayers at 6:43 PM

Now how is it that Our Governor and her cabinet doesn't understand how to spend appropriatly and hold the line where necessary? Could it be that she has never in her life had to live within her means and by a budget? Just a thought!

"It obviously is not working."

Oh, it's working very well indeed for those who call the shots in Lansing - the beneficiaries of state spending. Everything the Lansing political establishment does makes perfect sense once you recognize that their prime directive is to protect the perks and privileges of government employees, and increase their power vis-a-vis the citizens.

"It obviously is not working."

Oh, it's working very well indeed for those who call the shots in Lansing - the beneficiaries of state spending. Everything the Lansing political establishment does makes perfect sense once you recognize that their prime directive is the protect the perks and privileges of government employees, and increase their power vis-a-vis the citizens.